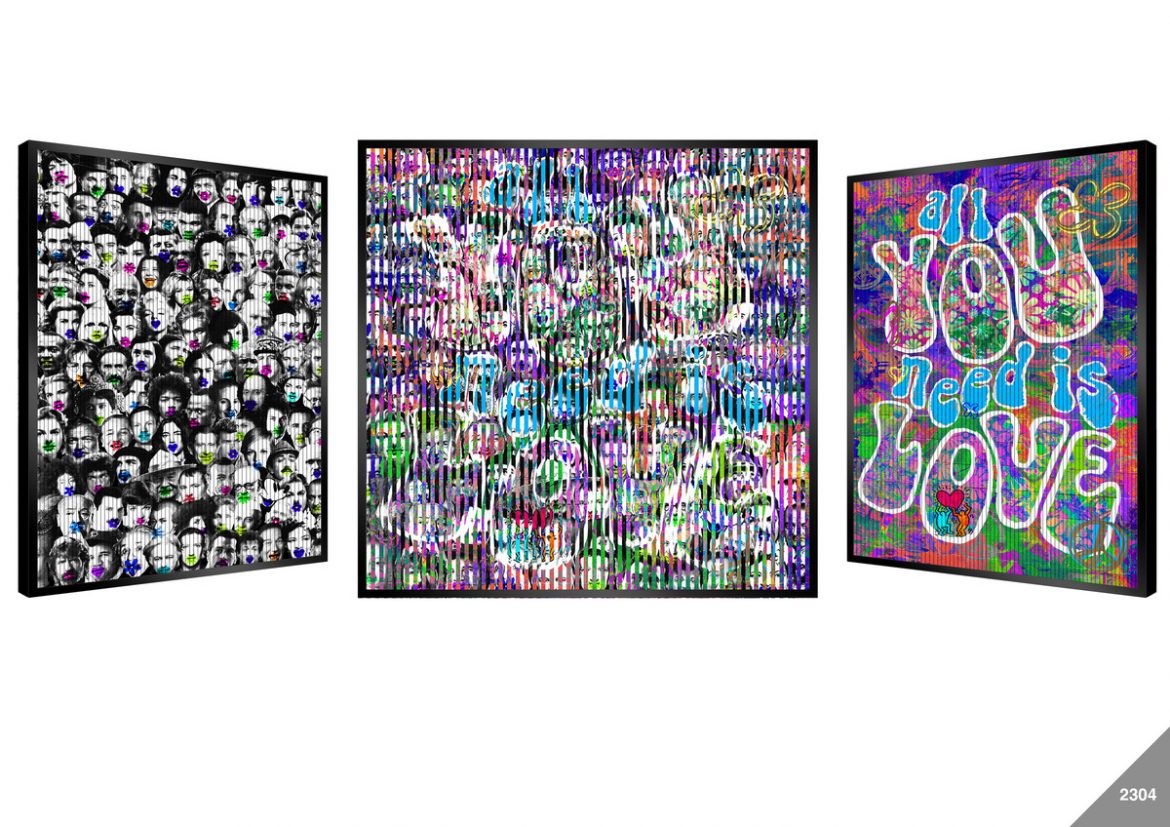 Born in 1960 in Paris, Patrick Rubinstein is a contemporary French artist from the world of fashion working his paintings on a concept of OPT ART (Kinetic Art).

Thanks to an innovative technique his works offers you 3 different views depending on your angle vision and giving you 3 times more emotions.

You would like to see the idols of your youth? Patrick Rubinstein stages them for you by combining a unique optical game to another image. For Michael Jackson? A graph of “Beat It” in a nod to his worldwide hit in 1982.

The Beatles? The Union Jack. For the four giants of the fifties, Spiderman, Betty Boop, Super Man and Marilyn?… The same, but in color or black and white, depending on the angle of view … We are in the pop and street art, game design, dynamic and generous. But in the op art, optical art, which plays everything and especially to us, to our delight.

Everything begins as Patrick Rubinstein is still a teenager. He loves art, film cameras and kinetics. What to choose between the three? Nothing – that is all. It sectional lamella a picture, the intercalates with another, then glue the image reconstructed on a support, a tent folded up concertina and obtained a work in relief.

From the front, the picture is double, the two photos overlap, but for perspective, the effect is stunning. Depending on the angle, there appears only one of the two images. His concept was born in 3D.

His first creations are made from portraits of his relatives. A mother and son, brother and sister, father and daughter … Quickly, his visual game is a great success beyond his entourage. It must continue – all is how? His technique is still too small-scale to support more sophisticated designs, even more so in size XXL.

Never mind, the digital era will revolutionize everything. New technologies not only allow him to give free rein to his imagination, but also to proceed to infinity magic “cut, paste, fold.”

He experiences all compositions, candy ,, toys of our childhood, the small glass bottle of Coca-Cola, the four American presidents Mount Rushmore or the world of “Bonnie and Clyde,” with a rereading equally personal graph of the legendary Serge Gainsbourg song …

A happy memories swirl inspired works in 3D Patrick Rubinstein. Despite us the artist and takes us into his imagination and in doing so, strangely, in a joyous piece of our collective memory. The images come alive.

They change colors or nature sandstone our passes. The smiling face of Amy Winehouse, say the visuals of his albums and other clippings, and vice versa. The cartoons, other cartoons … His imagination is endless for us to rediscover the Pop and Street Art.!

The artist intrigues us and awakens our memories. In 2013, five years after he sold his first work at Drouot, it is 89th ranked Top 100 Best Reviewed French artists.

The consecration continues this year with the entry of “Music Madness,” a composition of singers and musicians who were important to him, bought by the art museum Copelouzos Athens. “Knowing that we have obtained from emotion to people who have a museum of contemporary art, it is a great pride. Entering the museum is pleased to share his art, to issue new sensations“.