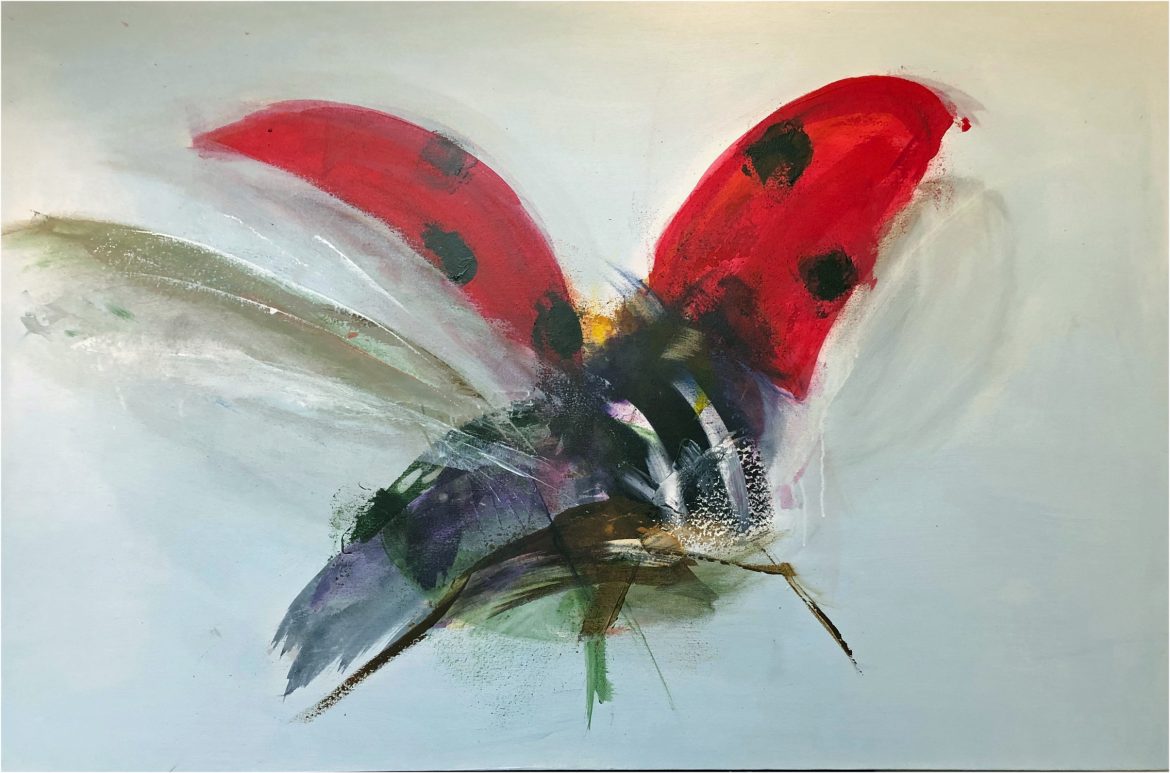 The featured work is ‘Scarlet Flight’. It is one of the latest works by Romany Mark Bruce. This new collection was meaningful indeed. The embedded narrative emerged from the impact of the Covid-19 pandemic, which surrounded the artist during a precarious creative, and physical journey. Suddenly, the artist re-took command of his brushstrokes as he was unraveling the nature of being. In so doing, his masterly pictorial qualities embodies fragments of the natural world.

THE NATURE OF BEING: CURATORIAL NOTE

This new collection is meaningful indeed. The embedded narrative emerged from a precarious creative journey. Suddenly, the artist re-took command of his brushstrokes as he was unravelling the nature of being. In so doing, his masterly pictorial quality has epitomised fragments of the natural world.
Romany Mark Bruce’s 2020 collection of paintings is called The Nature of Being. The artist released it after an abrupt awakening from his dream of sculpting the precious Pietrasanta marble on the coast of northern Tuscany, Italy.

What a journey! It began in March when the Covid-­19 virus became a reluctant pandemic. The artist had to flee Italy hurriedly, in a turbulent state of confusion and frustration. He was overwhelmed, as he had determined to set aside his brushstrokes and devote a great deal of his attention to his passion for sculpting. This was not to be. Suddenly, the artist encountered himself back home in dark solitude.

As Romany Mark stated: “creatively, I was in the wilderness”. He began to be confined by the lockdown experience. Undoubtedly, there were enough reasons to feel lost when the zeitgeist of the time was a fear of unprecedented risks.  However, for Romany, the experience took a positive turn. The artist described it as “The Prisms of Lockdown”.

The artist’s re-­birth of hope came as Romany Mark Bruce realised that the beauty of the Nature of Being was there, waiting to be found. Actually, it always had been but was hiding in a camouflaged fashion, waiting for a reign of silence and the slowdown of motion of the artist’s pace.

Seemingly that ‘encounter’ reconciled the artist and the force of nature. His artistic palette lived again, as if guided by whispering rainbow voices that enriched and enlivened each canvas with life and light. So, The Nature of Being collection was created.

Each of nature’s creatures flourished. A harmonic melody of heat, light, life and synchronicity directed the artist’s gaze to be enveloped by the Haze of Summer.  Patiently Romany Bruce was transported by strong sunshine to paint Melting into Orange. On another day a sweet smile welcomed the Scarlet Flight.

On other days a symphony of colours continued to be jostling to linger in the artist’s canvases. The Nature of Being emerged with a smooth and subtle palette as a talisman of the artist’s fingerprint or a reminiscence of Romany Mark Bruce’s own artistic journey. Undoubtedly he felt that there was a possibility for that which was better about humanity to be rediscovered. His canvas Could it Be vigorously captured this desire.Romany Mark Bruce asserted, that “this collection is not inspired by nature: instead it reflect my appreciation of the nature that surrounds me”. But, undoubtedly I may say is a tribute to it.

‘The Nature of Being is a homage that celebrates life and the power of nature to be able to re-­create itself. In a way is the artist’s usher of Hope! To him and to all of us!Enjoy The Nature of Being Collection, and the narrative behind it, as much I did!

Romany Mark Bruce was born in Ireland 1960 and came to England in 1978 to study law. After living in Dallas, Texas, he settled in London, moving to Brighton in 1989.

Romany developed an interest in photography, in particular photographing modern building, and quite by chance was given the opportunity to try his hand at sculpting. He had his first exhibition in the Brighton Festival in 1992.

His sculptures, modelled in clay, and cast in bronze or cold-cast bronze resin have ranged from statuesque indoor torsos to heroic outdoor landmarks and mainly inspired by the human form. In later years he developed his style to deconstruct the human form, including the use of shattered windscreen glass to explore the space and light around the form. He started exhibiting his work in the Brighton Festival and success led him to give up a career as a solicitor.

His sculptures have been acquired by collectors worldwide, from countries including the USA, Australia, Hong Kong and the Middle East, and all over Europe.

In 2002 Romany started to paint, and had his first solo exhibition six months later, the first sale being to a visitor from Colorado in the USA. Again his paintings have been sought by collectors all over the world

Romany has for many devoted much of his time to fund-raising for HIV charities and is a Trustee of the Sussex Beacon, HIV/Aids Care Centre in Brighton.