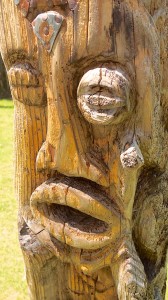 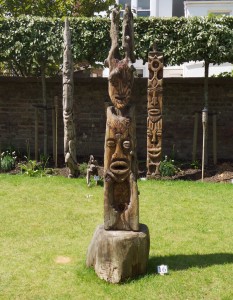 Many of the great comments about Encounters’ 2015 artists have mentioned Rafael Berrio’s wood carvings in the garden, especially number 16! So, here it is!

It’s a modern piece but connected to the soul of the land. It seems to belong to the time when people believed that the Earth was alive and needed different forms of nourishment. This was a time when the gifts of the World were not taken for granted but they were respected, as Mother Nature was wiser than us and had powers beyond our understanding. However, people were not mere playthings of nature. They had their identity – their own presence in the Universe – their own destiny – their own duties. So, whilst the forces of nature shape mankind so mankind could create that which nature could not. In particular, meanings, symbols and poetry. Rafael’s way of working is to gather wood as a beachcomber and discover what it is latent within it and what has to say to us. Then he releases its spirit and being a poet himself he gives it intelligence, humour and timelessness. So, we are given a glimpse into a world within a world and we are touched by vibrations of a life force that we sometimes sense but Rafael knows more deeply that most of us.